Champagne or not Champagne? That's the dilemma. I have confessed few times that I have a weakness for Champagne, that's true. Because I like the after taste that the Champenois method leaves in your mouth, in a very discreet manner. That fragrant sensation that pairs perfectly with shellfish but that can also be enjoyed alone chilling out in front of a nice lanscape.
So Yesterday I opted for an alternative "classic method" bubble, choosing the Pas Dosè 2009 of the Fongaro factory. For those who don't know, Pas Dosè means no dosage, zero sugar added (also Brut Nature).
The grape is not Chardonnay, it is not Pinot Noir; it is the Durello or Durella grape (depending if you are male or female chauvinist :-)), a light-skinned white grape variety which comes from the Veneto region, distinguished by a significant acidity, which makes it quite difficult to use it stand alone and not as a blend with other grapes.
Despite of that, Fongaro has been able to produce a Champenois method using Durello in a single-variety vinification, in the Monte Lessini volcanic area (the hills on which the vines grow are layers of rocks formed by lava flows and the soil is rich in minerals and fossil deposits), having a balanced result.


I have tried the Pas Dosè 2009 (around 18 thousand bottles produced) and even if the freshness was a little bit undermined by the age (we are in 2014) I have found it quite pleasant. Maybe less elegant than a Champagne, less brown-noser, going directly to the point. It needs to be understood. But if you do it, you will appreciate it and especially you will feel the terroir.
Due to its marked acidity someone could advice to pair it with fatty or oily food, taking advantage of the degreasing properties which typifies the grape. That' true.
Having enjoyed it some years later, when the acidity typical of the grape has been mitigated by the wine maturing, I have found the pairing with fish quite balanced as well, despite the rhombus fish tends to be a delicate dish more suitable with milder tastes.
I Always advice to be brave and try everything, especially what you are less used to. So, GO FOR IT! 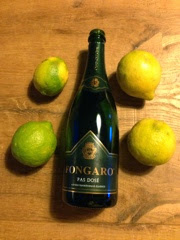 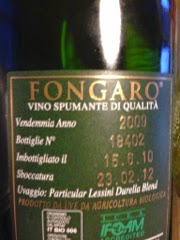