Are German labels so complicate? Come on, let's try it!

I am not a passionate of German wines in general for a very simple reason, I don't know them properly. I am familiar with Riesling, Muller Thurgau (riesling x sylvaner) since they are names that remind me about the German brothers.
But there also Gruner, Gutedel (just to mention some of them) less famous but not for that reason with less dignity.
So I decide to write this post just to get more familiar with the German/Austrian labels.
Many times you will read on the label the term Kabinett. It is curious to know that originally it implied a wine of superior quality, the German version of the wine term Reserve. The term originated with the cistercian monks at Eberbach Abbeyin Rheingau, where the first use of the term Kabinett occurred in 1712. The abbey's best wines were stored in a special cellar built in 1245, and it was later known as the Kabinett cellar.
Before 1971, the term Kabinett often followed the name of tue grape varietal. In 1971 it was officially noted in German wine law, and it was given its current definition which applies to wines which are light and non-"chaptalized", that in less technical words it means that it's not added any sugar to increase the alcohol content after fermentation. The technique is named after its developer, the French chemist Jean-Antoine-Claude Chaptal. 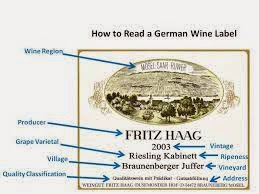 So Kabinett stays basically for a drier style of wine produced from grapes that are the least ripe.
It' fresh, it's very pleasant in summer because of its crisp acidity, citrus and green apple character.
Nothing complicate so far. I have found this quotation very emblematic of the common feeling about German labels: "the German wine-classification system can make the study of Burgundy seem like a proverbial walk in the park" (by Lettie Teague, Wall Street Journal). It's much more about the pronunciation rather than the classification itself).
So, after Kabinett we have in the following order:
Spätlese - literally "late-harvest," more body than Kabinett, riper fruit flavors, no green apple and perhaps tropical fruit.
Auslese - from individually selected extra-ripe grapes; can be a richer, sweeter, riper Spatelese or very sweet.
It's not my intention to be boring so I just sommarize the following "steps":
Beerenauslesen it's from selected grape and it's sweeter than Auslese;
Trockenbeerenauslese (oh my God!!!) it's from selected withered grape and it's even more sweeter. Don't be scared you are not going to drink sugar: the territory in which the grapes are grown and the climate let acidity to play a dominant role without making the wine too sickly sweet.
A part from the above classification,
there are just a couple of names to keep in mind since they might appear on the label:
Trocken - Very Dry
Halbtrocken - Dry - Use is becoming less common
There are other few things but I think it's enough and that we have covered 90%, more than enough to be aware of the meaning of a German wine label!
I have tried last week this wine, Heiner Sauer (this is the name of the producerI - Riesling Gleisweiler Holle - Kabinet Trocken, pairing it with some sushi. Sitting out in my small terrace in a hot Italian summer evening I enjoyed it a lot, thanks to its elegant freshness. The estate is located in the Southern Wine Road area, in the German wine-growing area of Palatine; 25 kilometers south is the French border. In the current form of operation it has existed since 1987 and it is guided by biological principles!

Try it (only if you are thursty)! 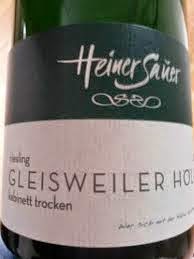