The I-Phone alarm rung at around 3.30 A.M. … 3-2-1: ready-steady-go! We wanted to reach the Tsukiji, known as one of the world largest wholesaler fish market. Just to give you an idea, it handles around 2,000 tons of marine products per day. Why were we so eager to go there? Basically to visit the tuna auction, the famous and precious maguro, which can cost up to 10.000 US$!  We thought it was worth to wake up at 3.30 A.M. after three hours rest which were following a long day with 7 hours of jet lag on our shoulders! At the end of the day we own a restaurant so we felt it almost as an obligation, like it's going to church on the Xmas day for Christians.
To make it even more adventurous, instead of taking a taxi, we decided for a nice walk in the dark, confident of our orientation capabilities after less than 24 hours staying in the city. And we were wrong. We chose the longest way (coming across plenty of diligent men at work) and we arrived at the Tsukiji at around 4.30. 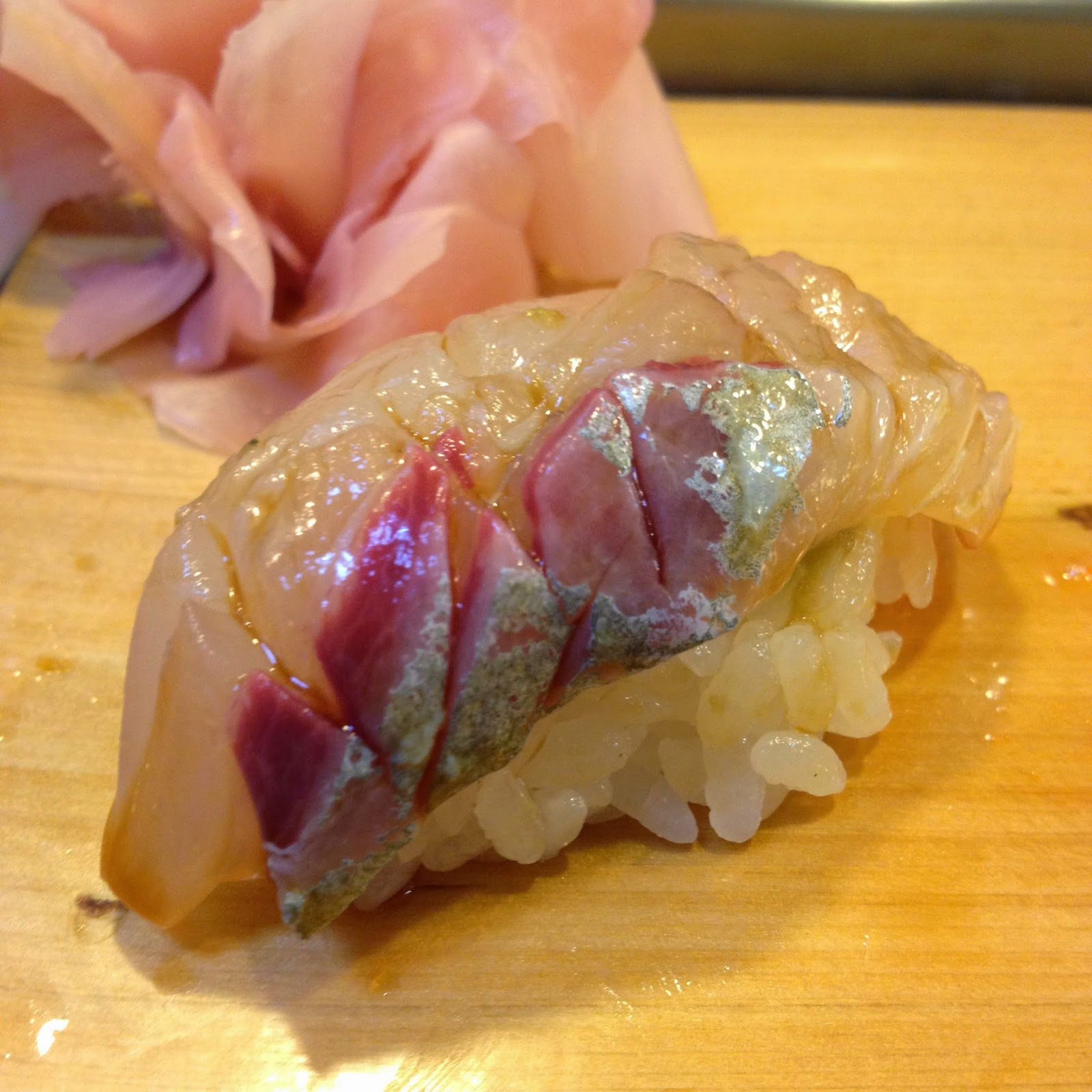 Once arrived, with our sleepy English accent we started communicating with dozen of guards in order to understand if we could register for the tuna auction. The answer was several times the same. The frustration got double. Firstly because their “not sleepy” English was terribly hard to understand; secondly because once we understood it, it was clear that the answer was “NO, the registration closed at 4.00”.
Ok, here it’s how it works: the number of visitors to the tuna auction per day is limited to a maximum of 120 people. Tourists have to apply at the Osakana Fukyu Center at the Kachidoki Gate, starting at 3.00 A.M. on a first-come, first-serve basis. Between 5.25 and 6.15, into two separate turns of 60 people each, it’s possible to assist to the auction on a dedicated visitor area.
If you read the Lonely Planet guide it’s not 100% clear the time you need to be there to register. That’s why we got confused, and we thought that almost an hour earlier was enough. But on busy days, people start to line up long before 5 A.M. to grant themselves a place. So, rule #1: wake up at 3.00 A.M., take a taxi to be there the latest at 3.30 A.M. and wait for your turn (as we did on the last day of our trip)!
So, what we did? It was not dark anymore, the idea to go back to the hotel was not appealing and so we decided to stay and experience the rest of it. It was 5.00 A.M. and the inner market was closed (it’s open to visitors from 9.00 A.M.). But we could walk around the outer market, which is located just adjacent to the inner one and discover the small retail shops and restaurants; there was not only fish but also other types of food and vegetables, knives and other food related items. Interesting but after half an hour we have visited all. So we got closer to the wholesaler part and tried to get into the inner market several times, risking our life between the busy bustle of forklift trucks and workers coming and going into all directions. Not an easy one. Every time we got blocked by the watchmen! Luckily they were quite nice (which doesn’t mean smiling but at least polite and not shouting at us). In another country we would have been expelled. 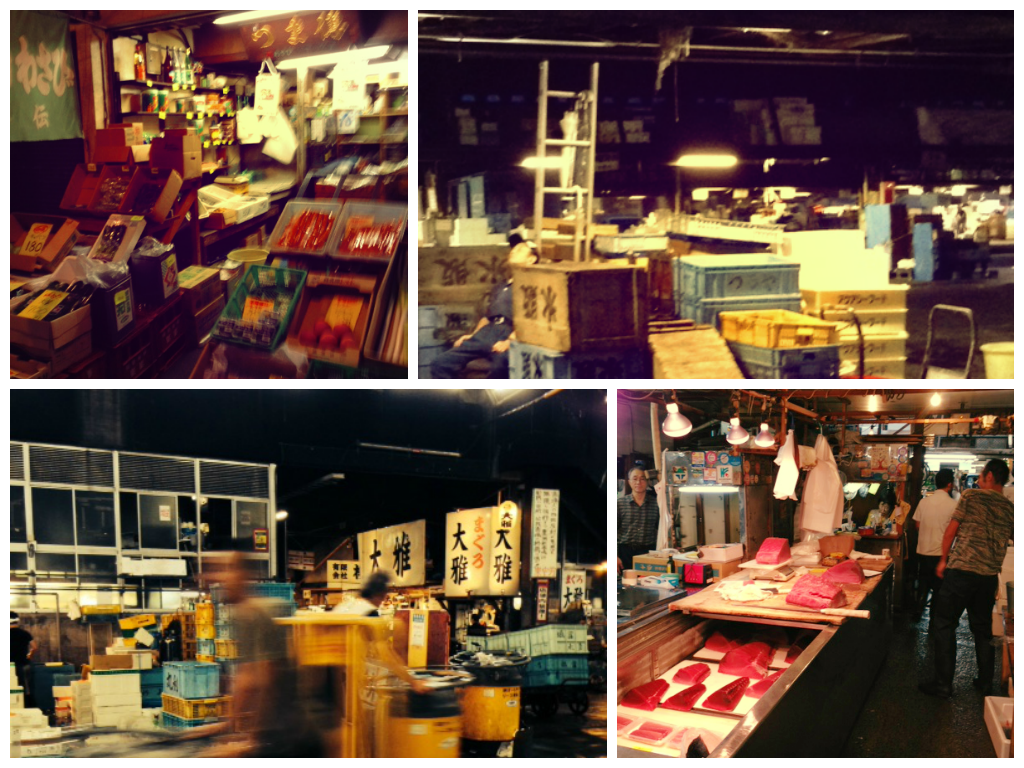 So, the remaining option was to have breakfast. Yes, you have understood well, sushi (=raw fish) breakfast at 6 A.M. Believe me, when you are there it’s simply natural. The fantastic smell of the fish (I have never smelled something so fresh in my life and especially in a fish market) makes you drool. At the beginning we were captured by the amount of people crowded along a narrow lane out from the most famous sushi bar in Tsukiji: Daiwa Sushi. Daiwa is a traditional sushi counter with room for about a dozen sitting elbow-to-elbow in front of the chef; the omasake (chef’s choice) menu depends on the catch of the day. They say (or better it’s written) that it’s the best one. The best one in Tokyo? The best one inside the market? Who says that?  A woman came out from the restaurant and told to the people queuing that they could have been waiting for hours and hours and specifically to us (arrived between the last ones) that we would have dreamt about our sushi for at least 4/5 hours… Another man (he looked like an unauthorized guy coming from the outside of the market) shouted at us saying that we were crazy to wait all that time and that he could have brought us to whatever other sushi bar with the same quality but not such a long queue. A market watchman stand closed and, a part from discouraging him a tiny bit, he didn’t looked to be too much surprised. Maybe it’s the same scene every day!
During the first 10 minutes we were puzzled. And we met a tall Italian guy from Monza who was as puzzled as us (so the problem was not only ours)! We didn’t know if it was wise to follow that man (but he wanted to bring us outside) or to stay inside the market and choose another place where to have our breakfast. We went for the second option. And, I can say now with more lucidity, it was the better choice. Come on, you are in a fish market for professionals, all the fish MUST be fresh. It’s just a matter of popularity and about who was the luckiest to be firstly mentioned in a guide.
Following Lonely Planet advice we paid attention to the amount of people who were inside the sushi bars and opted for one reasonably crowded, especially if the crowd was made by local people and wholesalers wearing their plastic boots.
So tasty!!!!! Sushi and green tea at 6.00 A.M. in the morning is priceless! 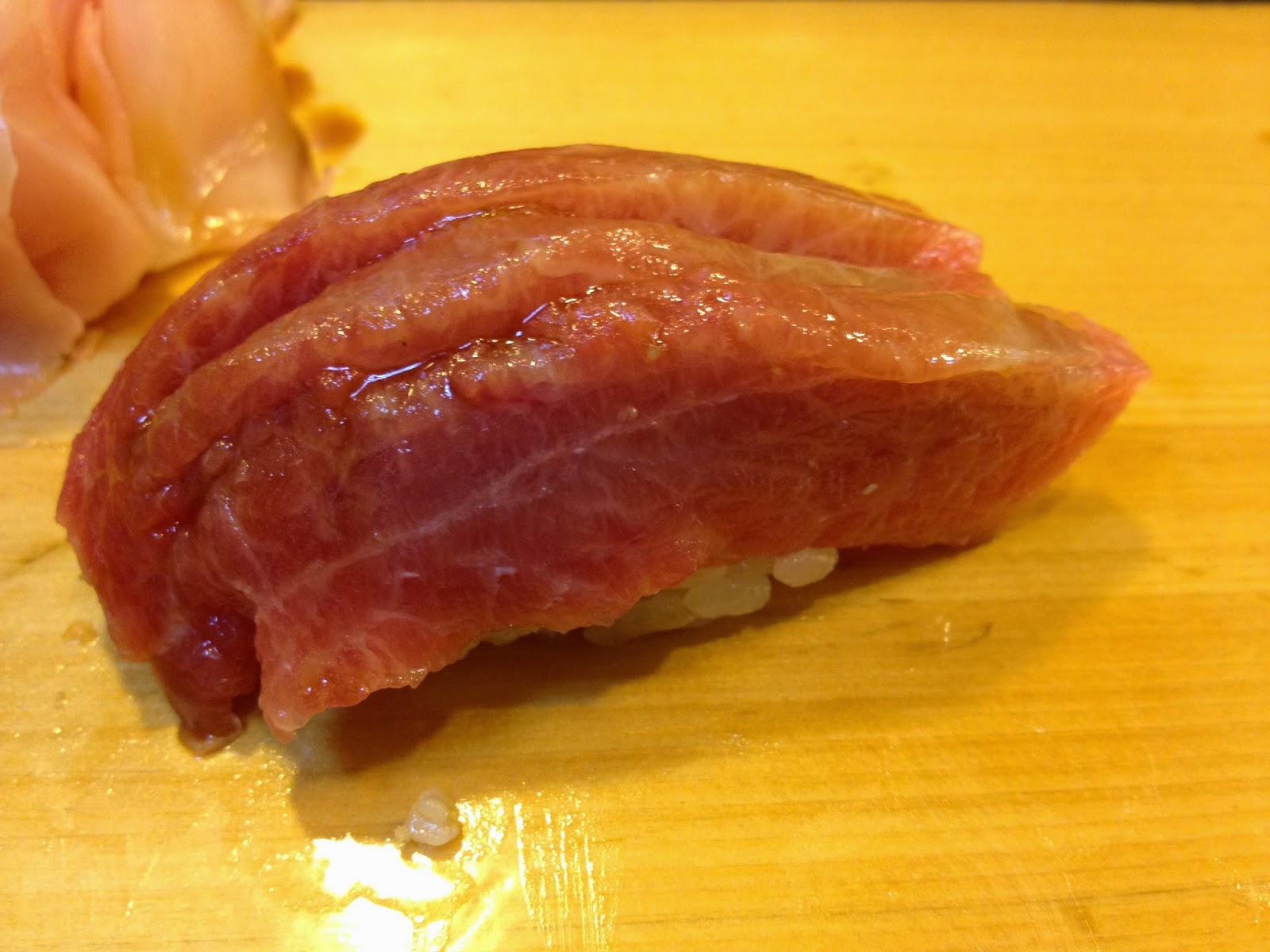 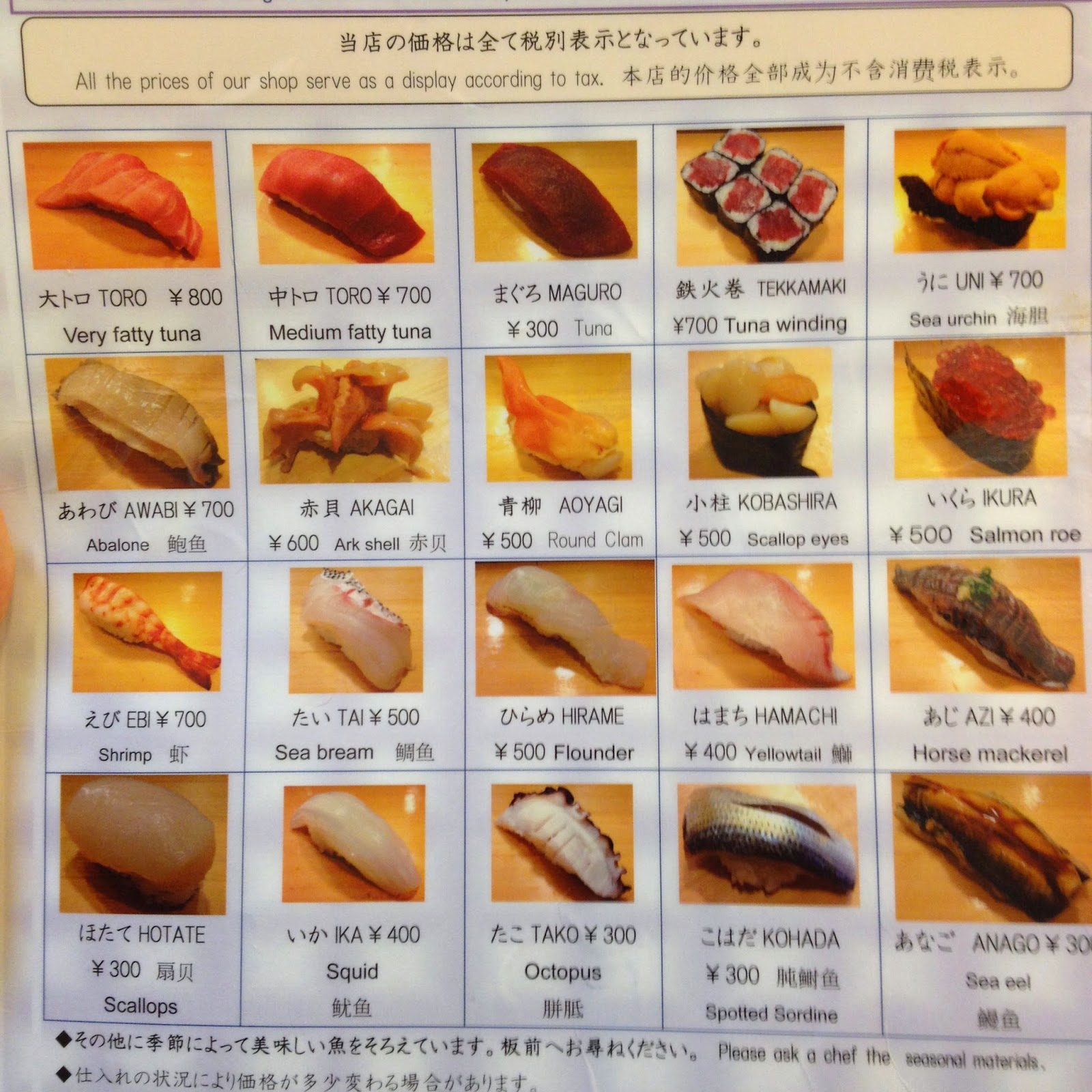 With some healthy calories into our bodies, we decided to make the last attempt to enter into the inner market climbing over the watchmen. And we succeeded, we did it! We entered before 9.00 A.M., the only tourists there, between hundreds of small stands in a large, crowded hall. All kind of fish was exposed in polystyrene boxes and the whole effect was so colorful. Not captured by the guards (it was not an easy one) we succeeded in making thousands of pictures to immortalize those wonderful moments. 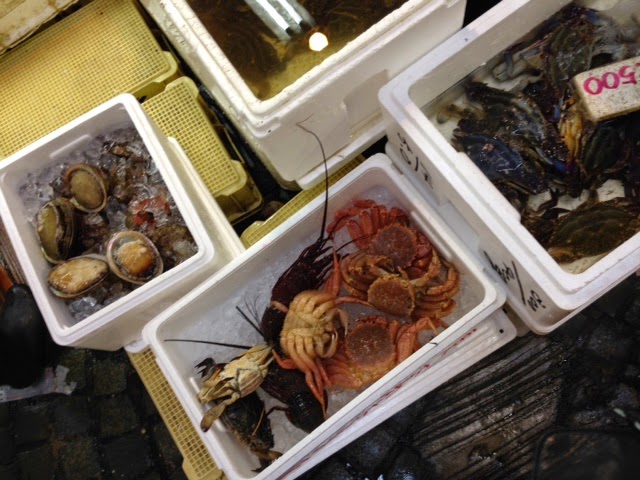 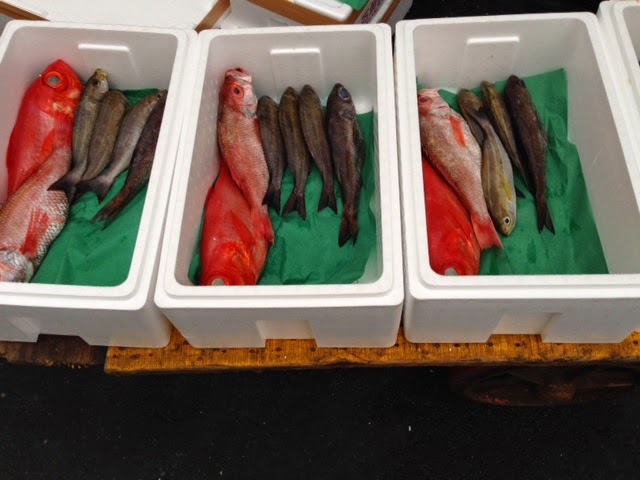 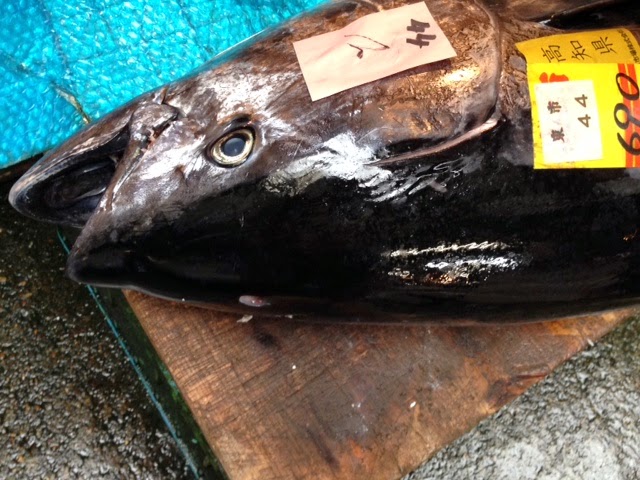 By 8.00 AM we were out. We exited the market, satisfied by the overall experience but keeping the promise that we would have come back on our last day to assist the tuna action (with the same pair of sneakers!).

And that was the case! ... If you don't believe me, here are the pictures: 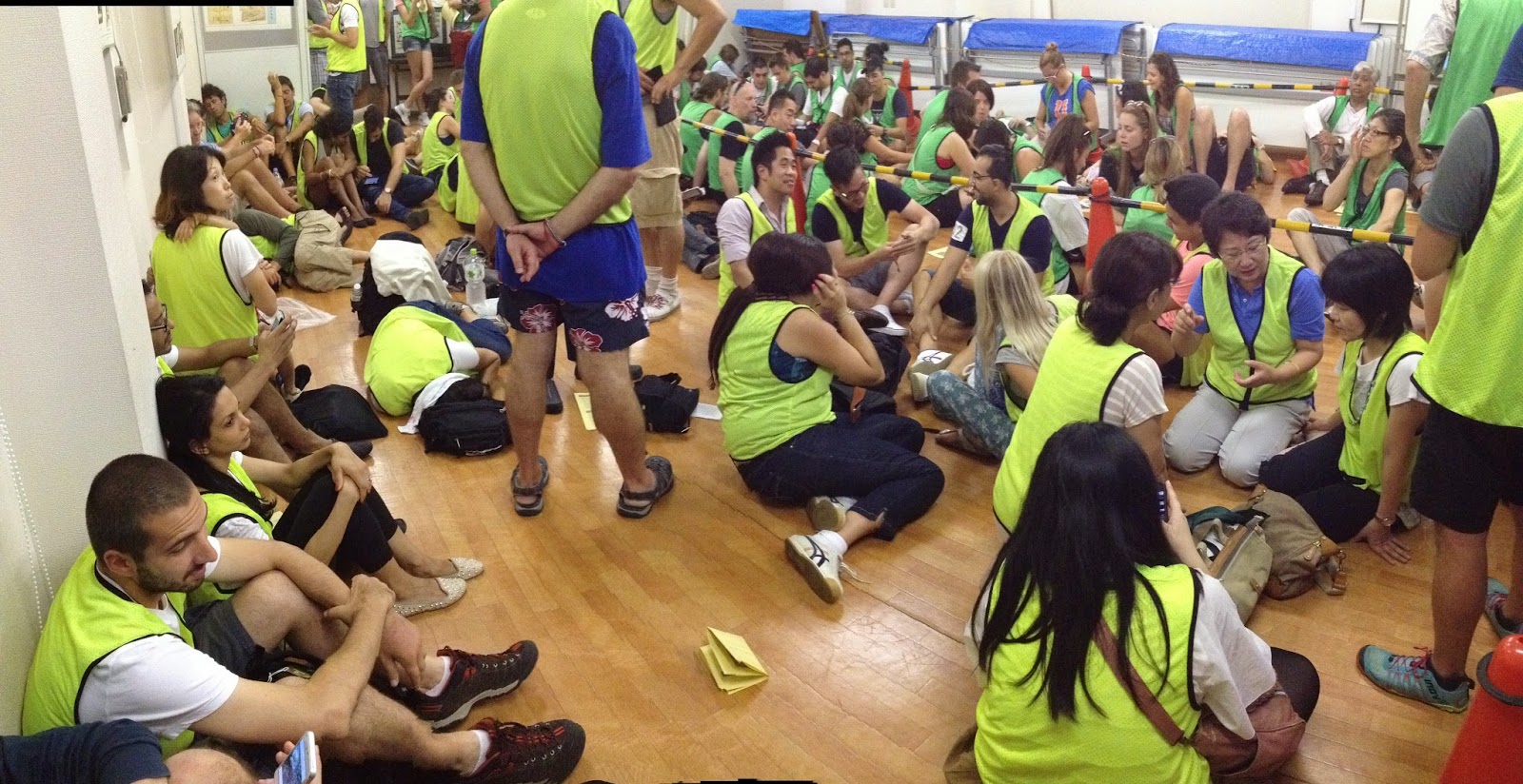 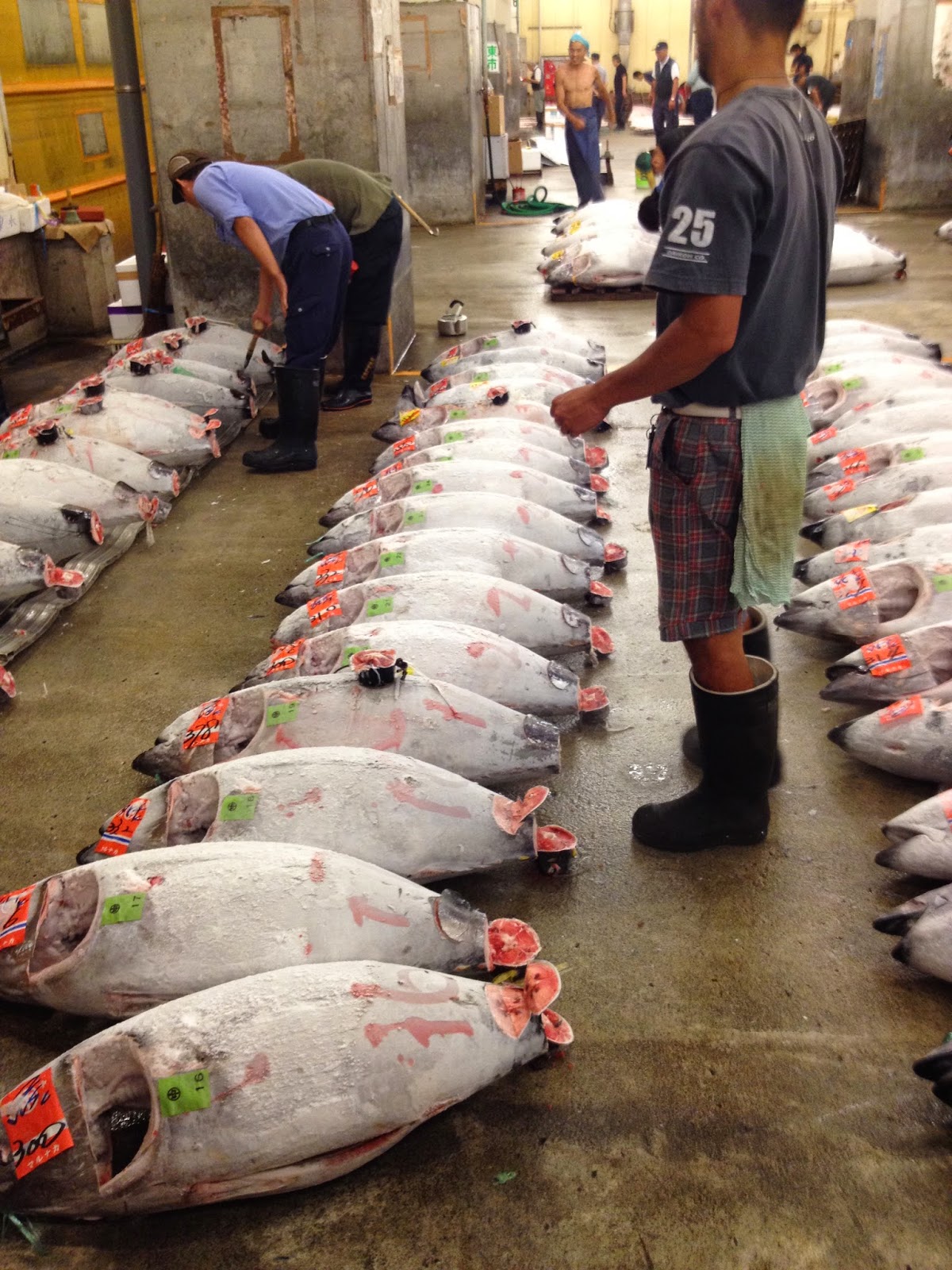