Michelin stars restaurant: would you eat lamb liver? There YES

It's not very easy that a tourist has the chance to visit this small village of the Belluno province, a partly - mountainous corner, located exactly in the centre of the lush Alpago hollow, between the righth bank of the Tesa brook on one side and the S.Pietro hills on the other side. It's close to the Santa Croce lake and the mild flow of air which origantes from the Dolada mountain make it really a paradise for nature lovers. It's also a great place for those who love air sports, like #paragliding: one day I'll have to try.
A long introduction to invite you to go there, have a nice walk (especially in summer) and then stop for lunch at the #Locanda San Lorenzo restaurant.
"It was the mid-Eighties when we decided to bring the old San Lorenzo Locanda back to life.  Our grandfather had built the Locanda at the beginning of the last century, as the last stop at which the horses and carriages headed for the Cansiglio forest could rest.  We wanted to recreate the atmosphere and intimate warmth of the early twentieth-century and also to emphasize the importance of traditional dishes creatively complemented by the wholesomeness of local produce, such as lamb from the Alpago valley, fish from the Lake of Santa Croce and the cheeses from the nearby “malghe” or shepherds’ huts".
It's a very warm atmosphere, complemented by the simplicity of the owners and the professionality of the staff. There is the possibility to choose a tasting menù with the chance to try every specialty but for the first time in my life I preferred to ordered some first and main course "À la carte". And one starter to share. The latter was a tartare of venison with mixed berries. Very original and delicate the juxtaposition between the wild fruits and the meat. 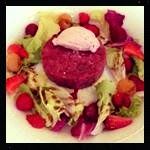 As a main I had a very elegante proposition. Small bites of fresh pasta stuffed with the ricotta cheese from the nearby Cansiglio forest and red turnip. The beautiful thing is that every single ingredient is grown and cultivated in the area: here the "zero km" philosophy is purely in place. 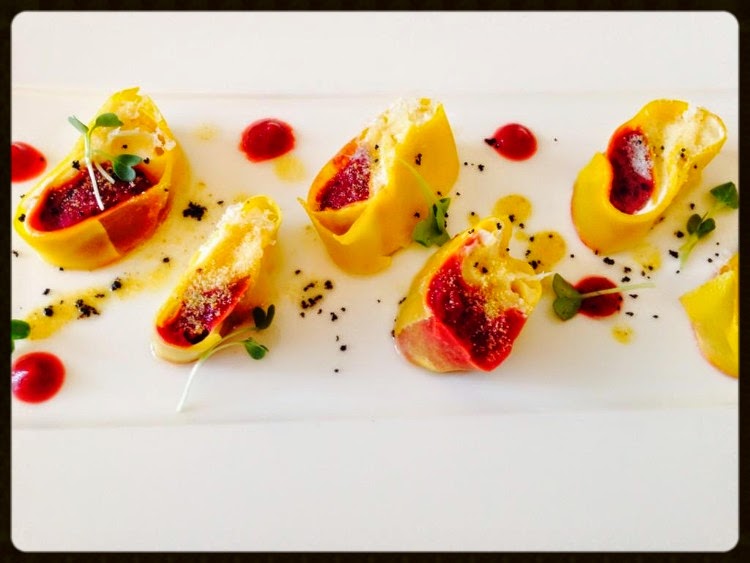 My couple ordered some #bigoli pasta made in the old style ("al torchio" means made with a special press) as our granparents used to do in the rural villages. The lovely thing of bigoli is their tick consistence which got on really well with the #roe deer meat sauce of  the Locanda San Lorenzo receipt. And again, mixed berries from the forest composing a layer on which the bigoli where served.
But the best part of all our lunch was the main course. A tasting experience of the lamb meat, cooked with the #Slow Food Presidium Alpagota Lamb, a native breed, who can provide quality meat, milk and wool. These days Alpagota sheep are raised in wild or semi-wild conditions almost exclusively for their excellent meat! We tried the  lamb fried brain, the liver, the leg, the tripe and the carpaccio: simply sublime 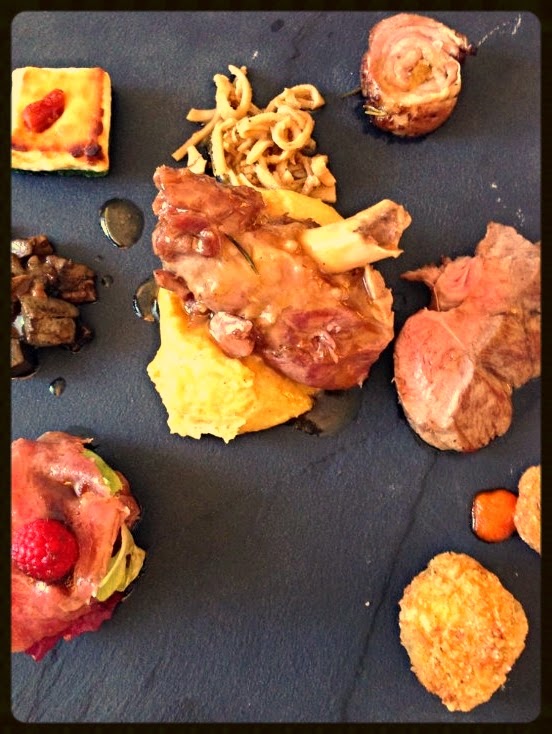