On the 17th of August, during my stay in Kyoto, we wanted to go and visit some sakè brewery. As usual August is the worst month for taking culinary and drinking holidays, because most of the companies are closed and stop their normal activities. It happened the same last year when we went to Champagne region.  But you can manage anyway and be lucky like as I am, having wonderful experiences.
We asked some advice at the Hotel Reception (a very nice girl explained us all we needed) and they suggested to visit the Horino Memorial Museum, quite close to where we were staying. At first I was a little bit skeptical, since I didn't want to visit a museum but a real factory. But due to timing and also confident on the advice received, we finally went there. At the end, I enjoyed really a lot and I met wonderful people.
Some information about it. The Horino Memorial Museum is the home of a famous sakè brewer "Kinshi Masamune". It was born in the late 1700s and in the place where now the museum is located, they had been producing sakè for around 100 years. In the late 1800s they moved it to the Fushimi area of Kyoto but the original establishment has been kept by the Horino family as it was originally, preserving all its charm. It was only in 1995 that they open it to the public (good choice!).
We had been welcome by a very nice man who guided us through the whole house, explaining in English all the story behind it. You can ask him all the questions you have in your mind and he will be happy and proud to answer you.
We visited the cellar, the place where they used to brew sakè. 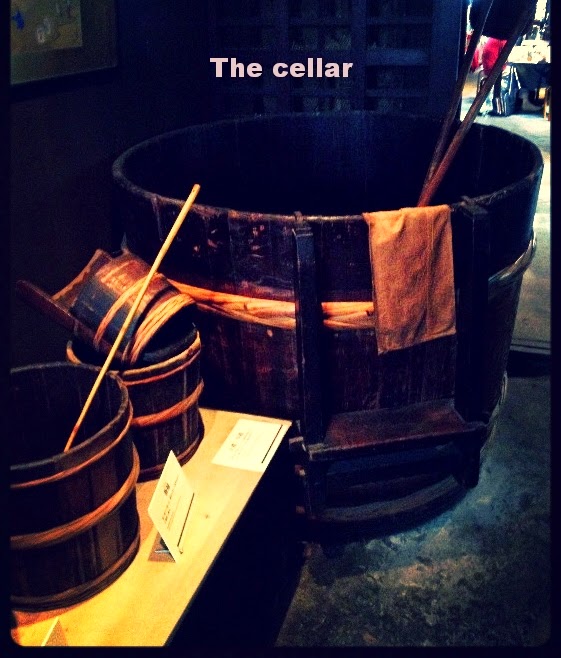 While looking at the old equipment still present there, he explained us that the key element in the sakè production process is to maintain a constant temperature, possible there thanks to the tick mortar walls. Then, he went through the different elements which allow to prepare sakè: rice, water, yeats and ... koji. What's the latter? Koji is a micro-organism similar to the mold present in the blue cheese, used for making miso or soy sauce. Sakè is fermented through the use of this Koji which convert the starch, naturally present in the rice, into sugar. Once the yeast is added to this sugar the rise starts fermenting: what makes sakè different from wine and beer is that saccharification and fermentation takes place at the same time in one tub.
We moved then to the Momonoi well, which is still yelding a great quality water, currently used to brew the local beer in the cellar before mentioned. You can try to drink the water!! We did, but we also then tasted their craft beer :) 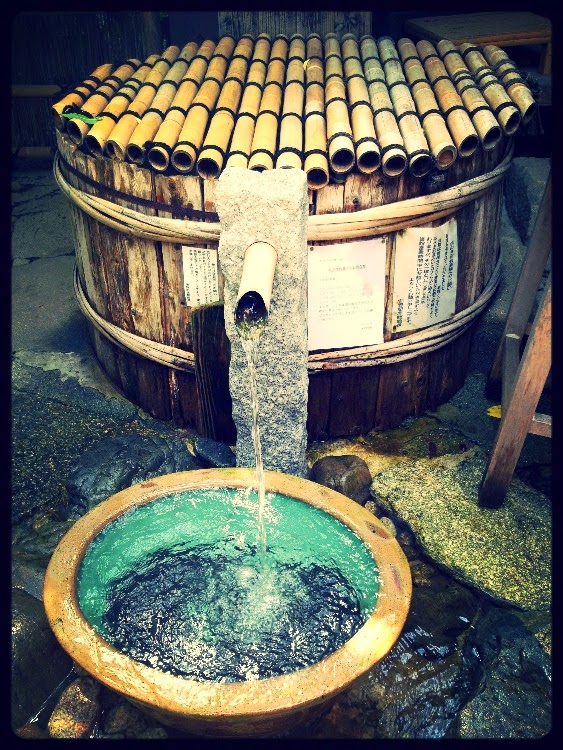 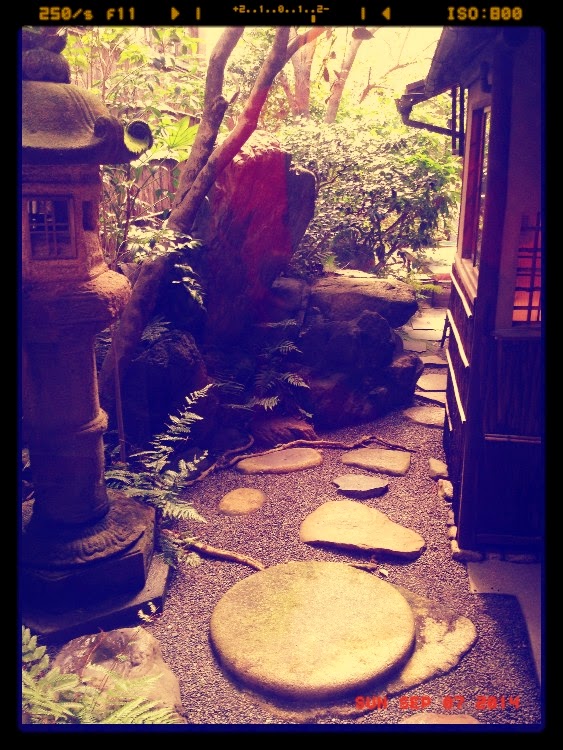 The visit continued with the Machiya traditional wooden townhouse, re-built in 1870, through its different rooms (the one where accountancy used to be managed, the one used for business meetings, the one used for important customers where private parties were held and the "Yaneura - beya", an attic just under the roof where workers were sleeping) and the courtyard garden, an inner garden which they say is very rare for Kyoto Machiya houses!). 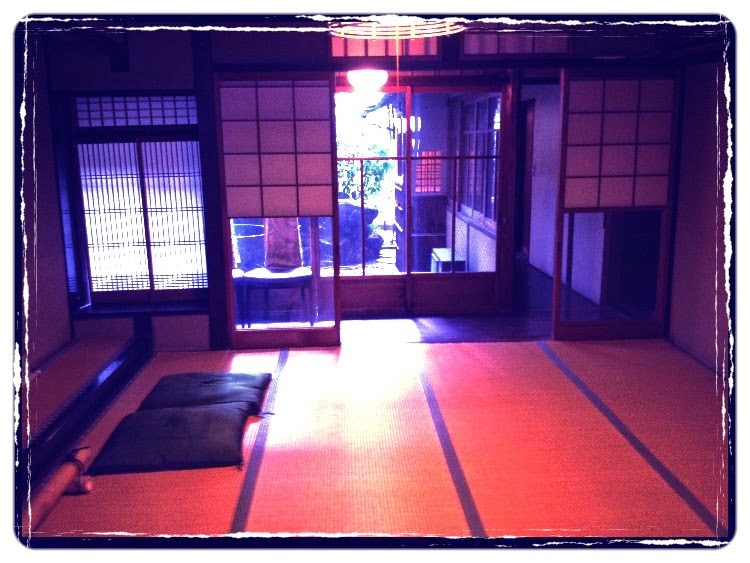 After that we made the traditional tasting you make in this occasions, with 3 shots of different types of sakè.
And we wanted to try also their craft beer! It was so fresh and pleasant in such a hot afternoon with 90% of humidity in the hair. 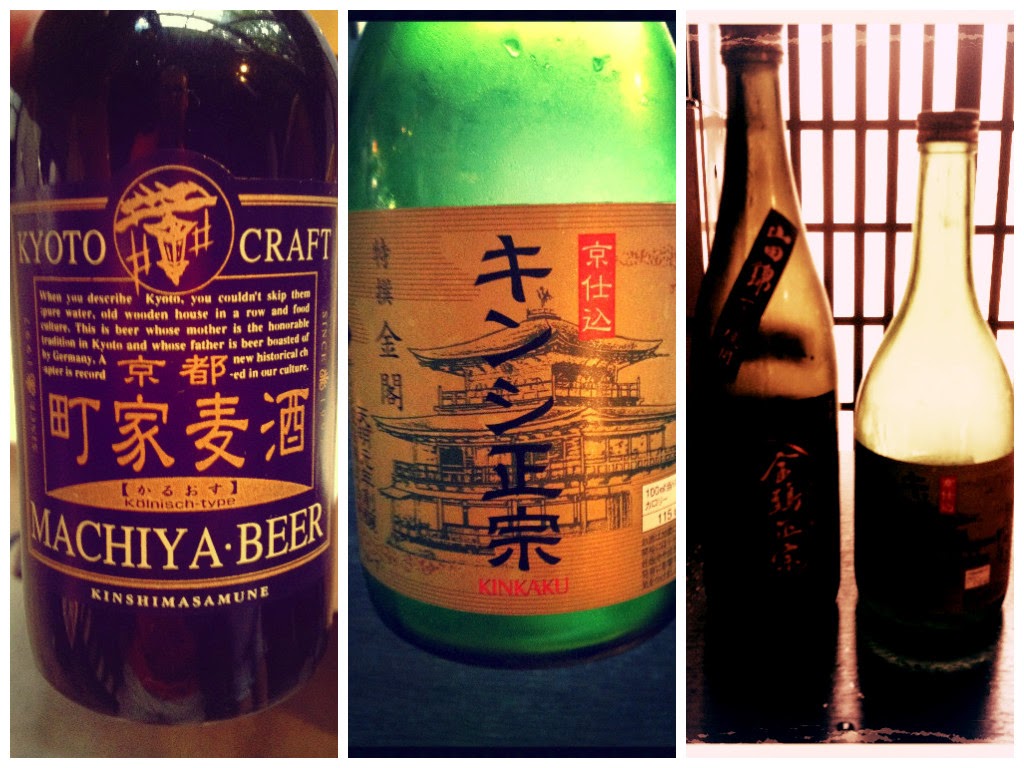 But the best part still had to come. We noticed around an agitated (in a good acceptation) atmosphere. We were mainly the only visitors there but the staff (I suppose one of the owners between them), toghether with the photographers were moving around like if they were planning something. After we minutes, when we were asked if could stay longer there to be part of their photo shoot for an advertising campaing promoting sakè tasting, we understood what was going on :)
It was very funny and we enjoyed so much. After an hour more or less, waiting for them to set up everything, we sit down
flavorful - light - rich - robust
4 cups in different shapes made by Kyoto potter
with 4 different obanzai (Kyoto tapas)
learn which cups and what food goes best with each sakè from a sakè specialist 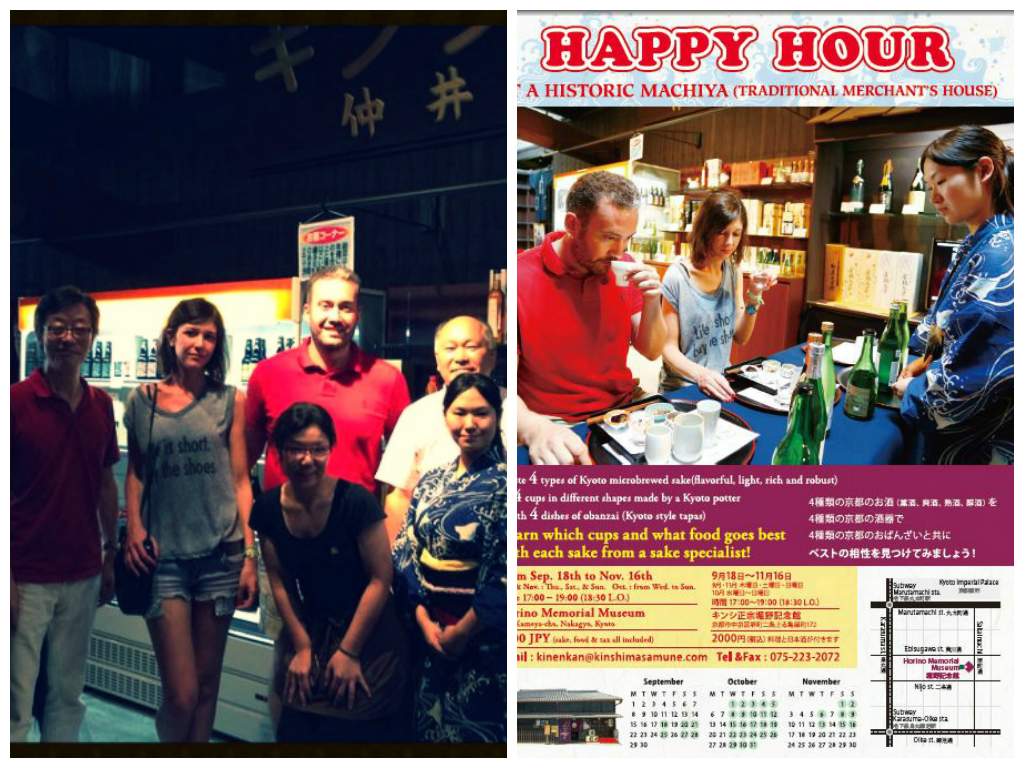