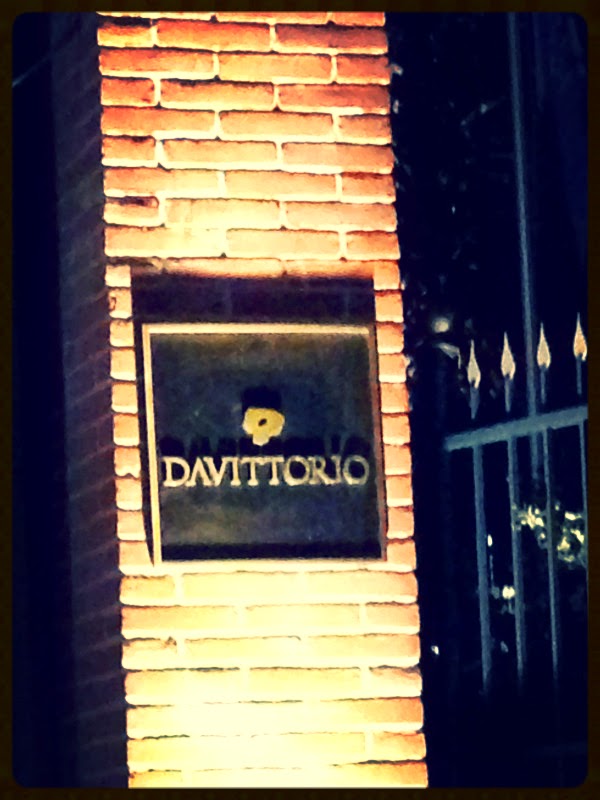 A little tale on my experience at "Da Vittorio", a 3 Michelin stars restaurant located in Bergamo, precisely in Brusaporto. As soon as you cross the main entrance with you car you enter into a huge park completely illuminated (you understand so that it was a dinner and not a lunch ;-) ). The restaurant is located on the top of a not too steep hill, from where you have a wonderful view. The last check of my face reflected on my compact mirror (an accessory I can't go out without) to see if it was more (or less) ok ... Acceptable. A quick update to the daily make-up and a last-minute exchange of my shoes. Ok, I agree the last gesture doesn't properly suit the concept of elegance but I am sure you agree with me that with zero degree walking six hours incessantly around Milan with a pair of #Hugs it's not elegant but it's smarter.
As soon as I passed the second entrance (into the restaurant of course, it's not a labyrinth) I got the feeling to be in a fairy tale. Everbody since the first moment up to to end is taking care of you (at this stage I avoid any pecuniary comment ;) ). We got accompanied to our table, whose distance from the others was perfectly measured (I had still the chance to eavesdrop a tiny bit from our neighbours :) ) and instantaneously served an entrè (maybe I remember wrong and it was after we ordered ... doesn't matter). It was really elaborated so don't ask me to repeat it. Nice, indeed. 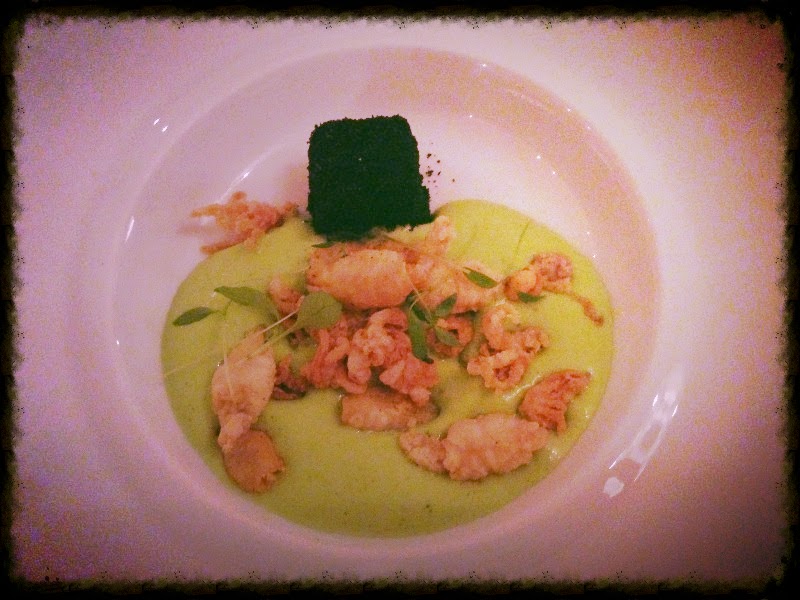 As a first impression I have to say that the place looks really traditional. Charming, elegant, warm, all fitting adjectives. But not innovative. It's not a critical point, just an observation. Differently from others Michelin stars where the atmosphere is more artefact, here you feel more .... Ok, I can't say you feel more like at home (do not exaggerate!) but maybe you feel less like in a 3 Michelin stars restaurant. And here let's confess that I have just one term for comparison, which is Le Calandre, by Alajmo, where I celebrated by 30s. But soon I will have a second jolly to spend ;) Let me give the time to save some money after Xmas squandering. 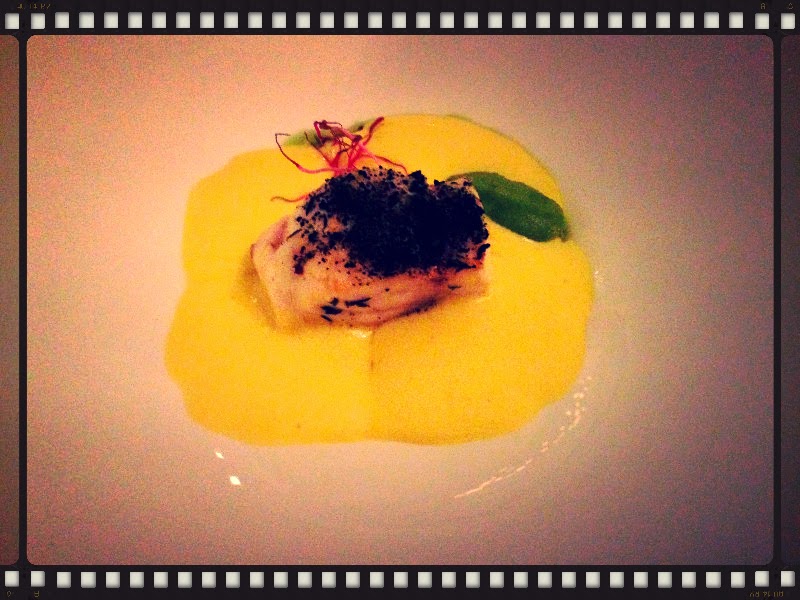 I was a little bit surprised about the Menù. I expected it was more oriented to "themed choices" rather than to the usual Starter/Main/Dessert structure. There was instead just one "dinner package" (let's define it like that even if it sounds more touristic than starred) for which we went for, without thinking even half a second. I might won't return to Vittorio another time in my life or, better, for sure I won't return to Vittorio very soon (it sounds less dramatic!) and therefore I wanted to try EVERYTHING. Let me let eat also the tablecloth! Yes. because "Da Vittorio", differently from the "new-age" Calandre philosophy, you have also the tablecloth. You see, I am not a liar, this restaurant is traditional as I commented before. 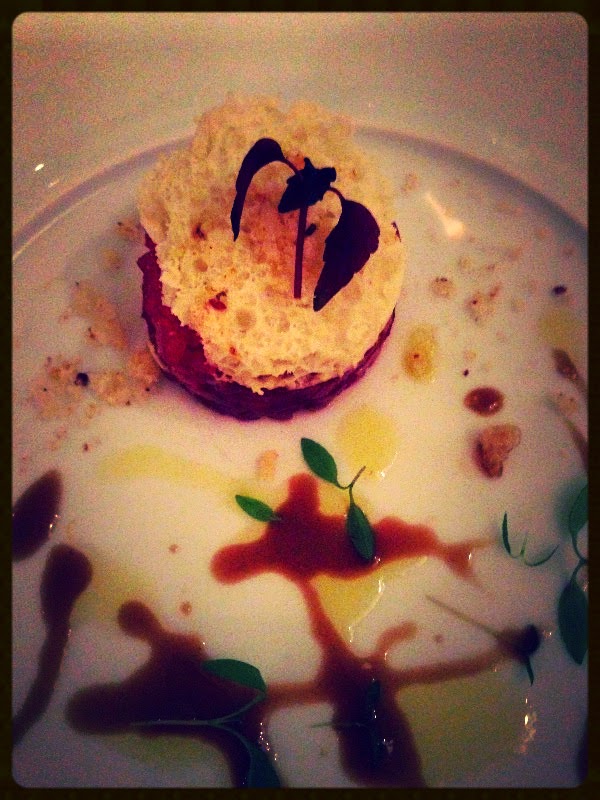 As I said we were very convinced about following the Chef Menù, a selection of different tastings, all rigorously made with fish. And I was astonished that the other tables were simply going for a "miserable" (it's rethorical of course) main course, like a tagliolini fresh pasta with some grated #white tartufo from Alba (5.000 euro per kilo). Maybe and most probably they are habitual customers.  Some rich entrepeneur from the area inviting for dinner the 20 years younger (secretary). Oh my God, he was so ugly and coarse. A table of younger "hungry" (in al senses) businessmen with a plethora of models (or, if not models, reinvented girls in their max 30s after some plastic surgery). Last, but not least, a Russian family (for sure not habitual) with another plethora: of children this time. Who for sure aprreciated the three Michelin stars "decomposed zuppa inglese" dessert (but maybe would have been more happy with a MD chocolate & cookies icecream, what do you think?).
Stop to be a blabbermouthing (I am speaking to myself now)! 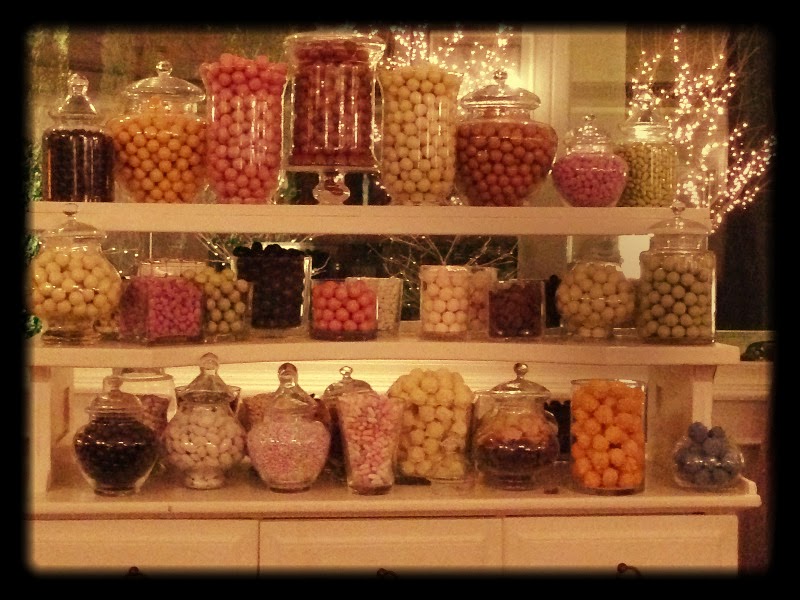 How was it? Excellent. From the starter (the 1st one, the second one and the third one: so was not actually a starter) to the dessert (the pre-dessert, the second pre-dessert, the real dessert, the afterdessert: which one was actually the dessert? I got lost).
The pictures speak themselves (maybe they would speak better if they were made by a real photographer and not with my I-phone) but I just want to mention the courses which impressed me more. The Tuna tartare with an oysters marshmallow foam. The fish risotto, where the ingredients were decomposed (included the condensed bouillon) and needed to be melt togheteher to regain their essence in the multitude.  The mixed fried fish where each ingredient was basically part of a complex mosaic. The "decomposed zuppa inglese". Their assortment of homemade (as everything there of course, even the cheese is prepared by them and not supplied) of bon-bon of all colors scale and filled in with the most unthinkable ingredient (even vodka).
From my position I could admire the open-plan kitchen and the multitude of chefs at work.Wow! That looked like an army.
And the same the waiters were walking around like ants. So I can assure you that bread on my table was not missing. From the saulty croissants to the "whatever other kind of bread". Extremely tasty and fresh.
The cherry on the top was our wine. Useless to say that the wine list was like a bible containing all possible religions. We opted for an autoctonous one. We went for a certainty: the Trebbiano d'Abruzzo of Valentini, 2011. Valentini is a myth. They say his Trebbiano he is the only one in the world able to cope with up to 20 years aging. Light but not light; the border between you like/you don't like is very ephemeral. But if you decide to like it, you do it seriously. Those slight mould notes which open themselves leaving space for a unique and irresistible complexity are unforgettable. Not filtered, not concentrated, not aged in barriques. Balanced, fat, fresh. And with that I have said everthing.