Why to pair Franciacorta with Kellogs? Or maybe with Fish?

Franciacorta is a sparkling wine produced with Champenois method. What does it mean? You can find thousands of definitions in the web, so I don't want to be boring. Basically the bubbles are produced through re-fermentation taking place in the bottle, like Champagne. The name "Franciacorta" comes from the Latin Curtes Francae, used to describe the "liberated" courts (small communities) of Benedictine monks released from the obligation to pay commercial transport duties on condition that they improved the land entrusted to them.
A good Franciacorta has nothing to envy to Champagne, since it reveals the same fragrancy notes, smell and flavour of bread crust.
Much less flowerly and fruity than a Prosecco produced with Martinotti method (re-fermentation process takes place in autoclave).
I have to say that I have a weakness for Champenoise method in general. And I would drink it starting from breakfast: why not to have a huge bowl of bubbles with Kellogs instead of my usual Soia drink??
Jokes aside Franciacorta is wonderful as an aperative and with medium-light plates that do not cover the wine body. Fish is ideal. In my opinion almost all types of fish until you keep the rule that the food has to keep a balance with wine.
Mixed fried fish and Franciacorta are in my opinion a perfect combination: the sparkling of the wine "dries" the unctuousness of the dish, leaving your mouth perfectly clean! 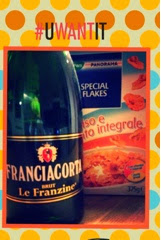