Is it always possible to pair wine with food? Depending on the point of view. It's always better in my opinion to accompany your dinner with a glass of good wine rather than not, because wine is a matter of pleasure first of all.
But being a Sommelier it's my duty to say that from a "technical" point of view the relationship between the two can sometimes be very complicated.
Like a normal couple: it can not always work :)
There are some combinations that you should strictly avoid. For example it's almost impossible to find wines suitable for some types of vegetables, like asparagus, artichokes and spinach. The high concentration of tannin in the artichoke clashes with the tannins present in the wine.
Obviously the rule is not valid when those vegetables are part of a wider preparation, like for example ravioli stuffed with ricotta cheese and spinach or a risotto cooked until creamy with cheese where the artichokes role is secondary.
A part from the vegetables above mentioned it's not advisable to pair wine with dishes rich in vinegar, with canned food (like tuna and mackerel) or with very sour fruit, like pineapple and citrus fruits.
And what about ice-cream? The official rules are against this combination. A soft interpretation is instead an "in-between" approach, which consider the following:
- the difference between the ice-cream and the wine temperature has to be reduced at the minimum. So it's better to choose a white wine, whose serving temperature is higher.
- the wine need to have a reasonable amount of residual sugar.
- the wine has to be drunk after few seconds after having swallowed the icecream, in order to attenuate the anaesthetic effect of the ice.
And what about chili pepper?
White wines contain an higher amount of flavonoids, substances that contrast the capsaicin, the main resposible of the piquancy in spicy food. The flavonoids properties can reduce the burning sensation that a chily pepper provokes! Plus alcohol present in the wine dilute the sensation even more. Last but not least, the carbon dioxide and the sparkling of the bubbles act as "brushes", wiping out the fire!
So what do you expect to cook a good plate of "spaghetti all'arrabbiata"? 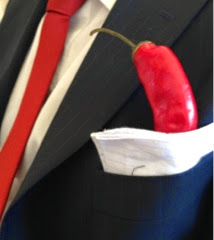